For streaming on something other than loudspeakers I currently use either

I find both a bit blimming awkward with batteries running down, or them going to sleep or whatever, and the physical DAC connection is prone to getting pulled out if I move.

So I was wondering about a small dedicated streamer.

To be honest I don’t want to spend a king’s ransom.

From a look around the internet I see iFi Zen Stream

ZEN Stream by iFi audio - The high-performance, flexible and affordable...

Audio streaming unleashed! As a 'Wi-Fi audio transport', the ZEN Stream acts as a 'bridge' between your Wi-Fi network and your audio system.

which appears to be productised Volumio. Needs an offboard DAC.

which needs a hard-wired ethernet connection. I guess I could get some kind of dongle. Needs an offboard DAC too.

Also, it’s Naim. I’ve had negative experiences in the past.

So, any other suggestions please? Must make a decent fist of UPnP and Spotify Connect. Very preferably wireless. Onboard PSU preferred to a wall-wart.

Silent Angel also does the Bremen B1 which does wireless and does both UPnP and Spotify. Wall wart is standard but Linear is available. At some stage before the heat death of the universe, the Chord Poly is supposed to get Spotify Connect as well and that would connect to Mojo2 for a chonky metal block.

Ah, an actual expert has reviewed what looks like a very appropriate product.

You need to spend at least £20k 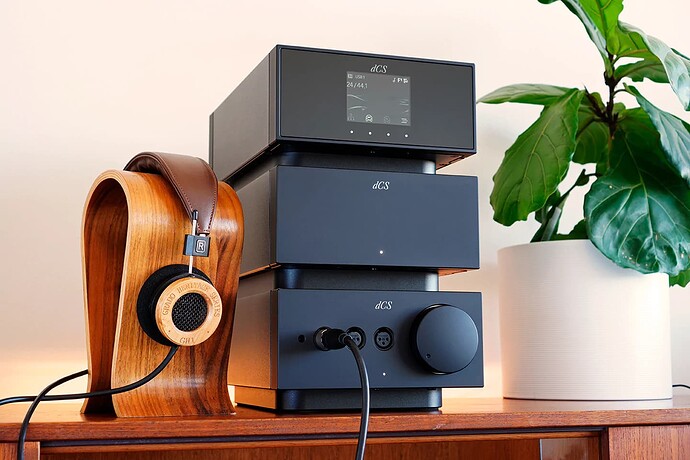 Oh, and no streamer.
You’re welcome

What about getting one of the LG V40-60 phones, where they went to town on the sound quality? They have quad DACs, and are meant to sound great. They all have headphone outputs, obviously, and will be nice to operate.

Looks like you can pick up a brand new v60 on Ali Express for £200-odd plus tax etc.

Oh, and no streamer

Oxford Audio have just mailed me about this.

It sounds like it does do streaming, but I guess that locally stored stuff is via Roon.

Roon is my favourite

Bluesound Node 2 doesn’t fit the bill or too cheap?

Nice and cheap, lot of hype around it at the moment. not sure how good it is but an alternative to the Ifi and it has a dac

There’s nothing too cheap for me!

A couple of things.

I had assumed that the Node 2 was completely analogous to the Sonos Port and didn’t have a headphone socket. It looks like it does.

My house is all-Sonos, I would be hesitant about bringing in a whole new ecosystem to feed a pair of headphones.

However your suggestion has made me realise that I have a spare Sonos Port in a cupboard. All I need to do is plug a headphone amp into it - iFi etc. and that’s it.

I’ll need one more mains socket than I otherwise would have done - a bit of a pain where I’m planning on siting it - but in general it’s a cheap(er) and very flexible solution.

Thank you for your suggestion - I probably won’t be following it directly but I think it’s the key to the answer.

edit: although five minutes later and I’m already thinking that the Bluesound would indeed be a very, very clean solution.

I have a friend with the Bluesound and he really likes it. The whole “it just works” thing is appealing.

Would be considerably more costly than a pair of horns

And no I don’t think you need to spend at least £20k I was just joking around and doubling @Gyroscope 's £10k suggestion.

Matrix Audio seem to have good reviews for their kit

The Matrix Audio Element i2 is the entry-level model of the element music streamer, it shares a wide range of technologies with other models in the series.

Hidizs, DH80S Portable Balanced DAC & AMP, meets your needs. It has a surprisingly good sound, build quality and spec for £140 from the forest.

Selling this great little streamer from Advance Paris as happy with my Node 2i so this is surplus to requirements. I have been using it to good effect...

May fit the bill unless DSD shenanigans are required.

We check out Grace’s compact, mastering‑quality solution for monitoring on the move.

I hesitate to suggest the chord mojo / poly. I’m no longer involved with it but it does sound rather good once you get it working.