Anyone know a parcel smasher who will insure to a value of £2k from UK to mainland Europe.

Only one I have found so far is UPS through Interparcel which is a bit pricey.
Most of them seem to have a max of £1K

Don’t all type at once!

I have now found Transglobal Express from an old post of Guy’s.

I thought it was generally agreed that that is your job.

That was my job in the other place,
On this forum I can’t be arsed helping anyone

FWIW, with higher value items, Interparcel is expensive when it comes to the insurance. I found it much cheaper to go to UPS directly.

Yes, that’s commonly the trade-off. The middlemen (Interparcel, Parcel2go etc) will get you a cheaper deal on the basic transport but will sting you badly if you need significant insurance. At some point it’s cheaper to pay the courier’s inflated carriage charge for the sake of their cheaper insurance.

The other critical thing with insurance is to check the list of items they exclude from cover. I like UPS. But they currently won’t pay out for damage to (among other things)

and they have Special Provisions for Amplifiers (£200 max compensation for damage).

They will cover you for loss (but only up to £2500 for amplifiers). The other thing worth checking is, if you pay by credit card, what the cover through that is like.

Has anyone ever managed to get the money back on a big claim?

In general on smaller amounts,i’ve found the insurance is rarely worth having when trying to get money back.

Any recommendation for a furniture courier?

Hel bought me this nice chair to match my sofa - 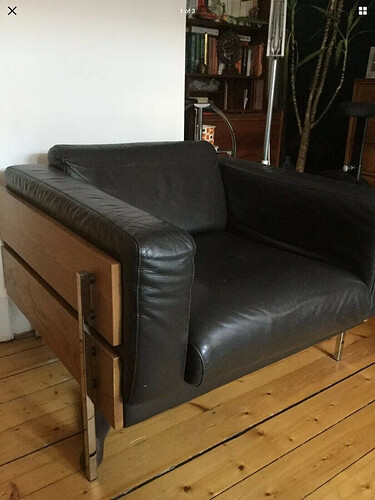 The only snag being is its in Glasgow…

She had left the privilege of organising collection to me believing her work was done.

This was suggested in another thread

Use anyvan or similar web courier bid type service Kev, they are working and might not be as much as you think to collect the kind freebie offer

Just picked up a very large shower enclosure from Southampton on gumtree for £70 to staffs, COVID safe as they dropped it in the garage and I left it there for a week

This company delivered the speakers, not sure if they will pallet the chair or if they expect it to be palleted ready for collection though.

Has anyone ever managed to get the money back on a big claim?

In general on smaller amounts,i’ve found the insurance is rarely worth having when trying to get money back.

Yes I successfully claimed £600 plus courier costs of £40 refunded when they damaged a reel to reel machine.

Two years for a reply, this is probably not an AA record but good effort!

Thanks for the recommendation chaps. So looks like actually getting to have my birthday present has just cost me £200

It is the thought that counts. Or summat like that.

I had a birthday present like that once.
A girlfriend bought tickets for the theatre in the West End for the both of us as my birtday present.

I just had to pay for the train tickets, the pre theatre drinks, the interval drinks, the after show dinner and the cabs (she wouldn’t use the tube),

I don’t begrudge the evening and remember it with a smile on my face.
It was more the definition of ‘present’ that made me post.

It’s like the idea of being bought a holiday for two, when the giver also receives the benefit.