I’ve now had the two-way fridges for nearly a week and I can’t get an amp that works.
The valve pre/power has a wonderful mid and top end but the bottom seems a bit loose and flabby. I then tried my old Sony vfet - bottom much tighter, mid sounds fine, but top sounds like a pair of Focals. Next up was a PopPulse T amp and an Icon Audio phono amp. Bottom much tighter and all sounded good until the Icon gave up on one channel (it hadn’t been used for a good few years!).
So I’m asking what others use with their fridges and what you can lead me towards. Money is not great so can’t afford to do box-swapping, but just interested to hear how others get on.
Cheers muchly.

They’re built by Geoff Kramer at EVA. Based on Leak, I think. They sound great with the Triangles but not doing it for me with the Fridges

Not sure. Geoff certainly sprinkled fairy dust on the pre (I was a bit of a Guinea pig for him while he was doing things to his Sapphire pre).

I use a neurochrome 686 but the best i’ve heard them sound is with a low powered valve amp or a little 20watt Pass Aleph that @edd9000 built.

I have a pair of Cymer 35Southern Stars that I’m not using at the moment if you are stuck. 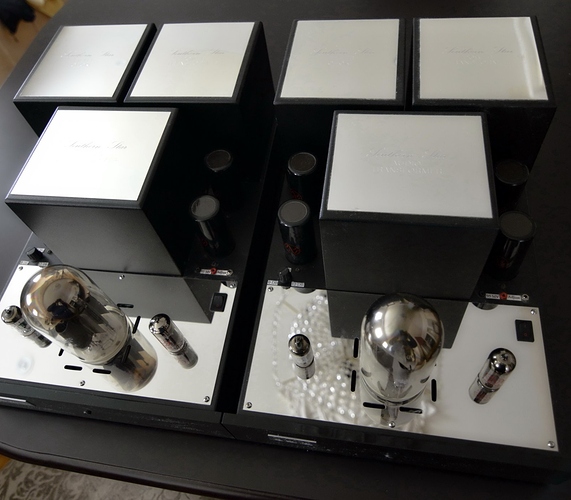 This is what I don’t get with my valves. Beautiful with the Triangles but not so much with the Fridges

I bet a 35W SET would be great with the fridges. Borrow them and don’t give them back

Wow! That’s incredibly generous of you, but, I’m sure, the end result for me would be I need them in my life but the divorce would cost me a lot more.
Thank you.

With Direkts I’d go 300B any day, they sounded great with the BP and M7

Best results I’ve had were the Puresound 845 / L300 combo, and the First Watt J2 with AudioValve pre. The Puresound A30 was also very good, controls the bass well, tho’ can be a smidge bright.

The best cheapie was Pro-ject’s Box Design Stereo Box RS. Any combo of pre/powers from that range will be good.

The Gato DIA-400 is also lovely, albeit, of all the kit I’ve ever used it has the most warm, euphonic “rosy-glow” to the sound! Surprised me.

A bit of power + quality is best with all of the Direkts; they’re OK with flea-power, but never really shine to my ear. They work very well with brutal powerhouse stuff, no such thing as too much power - they don’t need it by any means, but they don’t sound bad with it at-all.

Hence why the grunty T amp worked well, I suppose.

Thing with them going-up against Triangles is that nothing this side of proper horns does midrange and voice articulation as well as Triangles, and they also have a very distinctive fast, articulate but very lightweight bass quality - it’s a very unique sound, and there are simply no other box speakers that sound like them, no matter what amps you chuck at them.

Did the Icon phono just go silent on one channel ? If so it might not be too complicated to fix (I’m not pitching for business, ISTR we once fixed a valve amp on here in real time - one of the small signal valves’ heaters had blown, new valve from the owner’s spares box and job done).

I’ve a feeling one of the the valves decided to pffft. Then again, it could have something to do with the whole world being out of sync. Difficult to tell when you have no knowledge of such stuff

First watt clones can be picked up reasonably F5 etc. Whatever happens the aleph 30 I got off edd will never leave. No matter what replaces it.

Such a well described view of the Triangles
I’ve so wanted the Fridges to be bigger and better, and I’m sure they’ll be with the right oomph behind them. I’m just don’t think I have pockets deep enough to play right now.
One thing, though, that you’ve helped me with, is the idea of some grunt at the front end. I shall persevere with this for now