Who cares about crap presents

what are we having for Christmas Dinner? 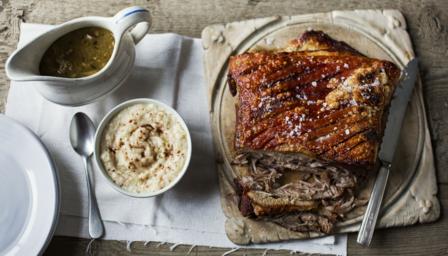 Will revert on dessert

Think I’m going to do rib of beef this year, have been on a program to convince the kids for weeks now and last Sunday I finally broke them.

I live in a house populated by one Vegan, 2 Vegeatrians and me.

This year “we” are having fucking roast Turkey, Pigs in Blankets, Bacon sarnies for breakfast, the fucking LOT. The worm has turned ! Off, the rest, can jolly well fuck

if we were feeding ourselves it’d be a rib of beef. But since we are in the hands of nice hotel this year it’ll be turkey

We’ll be in a hotel too, come the day, but tomorrow we have all my folks over. Today we have prepared the meat: rolled and tied turkey breast, stuffed with chorizo, minced pork & herbs and covered with a lattice of smoked, streaky bacon and a maple glaze.

Lobster and seafood bisque, venison and veg, and pavlova for the wife and me. Then cheese.

I wanted goose, venison and pork with crackling.

We’re having turkey and gammon.

The worm has turned ! Off, the rest, can jolly well fuck

That is the sound of snakebite talking

But still with correct grammar. Impressed!

We will be sat in Business Class on the way to Japan so god knows what we will get.

Its with SAS so could well be 6 month buried Herring with pickled turnip and loganberries. On the other hand it might half decent, hope so as first time in Business Class as we got a good deal.

I’ll be on pleb class with TAP - maybe a turkey sarnie?

Snakebite hasn’t kicked in yet, though I fear grammar may be heading west shortly

Anywhere nice. We are pleb on the way back as couldn’t stretch to both ways.

Mince pies, the rest is an aperitif

Lisbon for a few days. Might be warmer than here. Japan sounds nice.

So angry, so defensive! If any of those vegans/ vegetarians are female then your real problem is that you’re clearly gonna get pussy whipped, again.

I liked Lisbon when we visited a good few years ago as we did Oporto a few years later. Must revisit.

Love Japan and this will be our fifth trip in about 10 years.

Anyway back on topic, if I was in the UK it would be goose or beef with the usual trimmings.

I live in a house populated by one Vegan, 2 Vegeatrians and me.

This year “we” are having fucking roast Turkey, Pigs in Blankets, Bacon sarnies for breakfast, the fucking LOT. The worm has turned ! Off, the rest, can jolly well fuck

I assume you’ll be eating it in the shed?

I am guessing from your passive aggressiveness that you might be Vegesomething. No ?