Ok, I’m trying to clear out stuff I’m not using, and I got one of those eBay sell for a quid offers, so I’m going to list a load of things, but I thought I should probably bung them up on here first, in case anyone has an interest. I’ll get some pics up later, but just going to list them now, as if there isn’t interest, I want to get them on eBay fairly soon.

1 pair mid-top PA cabs, Fane Drivers. Mid-bass and compression-driver tops. These were prototypes from the Fane Factory, that they used to test drivers, so the cabs have multiple sockets, and are very well built. Sound way nicer than they probably should. Actually work perfectly well in a domestic environment. A bit tatty. £100.

1 BGW 750C amplifier. Immense Class A/B solid state muscle amp. As used by Vangelis to tri-amp his studio monitors, in the 70s. Basically an extremely competent bullet-proof pro-amp. Was over a grand new, in the early 70s. Very good condition example. Built-in fitness benefits, as it weighs an insane amount. £100.

2 pairs of Misson 70mk2 standmounts… actually really nice. Again, very tatty. £10 each. Would suit a shed/second system etc. I set a pair up on a decent amp recently, and they really are not a bad speaker at all.

Can you take a quick photo of the bass bins for me please?
cheers 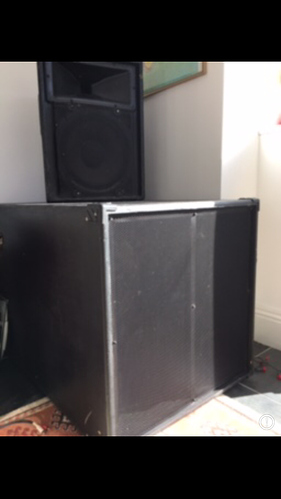 Old pics but this is they. Also with the Fane cabs as mentioned.

They have wheels on the bottom (rear, against the wall, in this pic)

Are they front loaded horns Nick?

I had all the PA stuff here set up as a system, with another pro-amp as well, and the net effect is gorgeous. Really warm effortless clear sound. I had it in the conservatory in my old house, which was an utterly sub-optimal space, but it just sounded superb in there. The subs are extremely competent. I don’t know exactly what drivers, but I get the impression PD don’t make a low-quality driver. I’ve been trying to figure out how I could cram it all in the house, but I just don’t have the space, so I’d rather convert it all to a bit of cash and save it from languishing in the garage.

Are the Argonauts the earlier standmount type or the later floorstanders?

That was exactly my thinking last year, but in the end I was right in the middle of house-move, and it would have been too much to think about moving all that down there as well.

No excuse this time

Well, not owning any of it because I’ve sold it, might interfere slightly…

It’s just not going to do any of it any good, sitting in my damp garage all winter

It’s just not going to do any of it any good, sitting in my perfectly dry garage

What frequency range do those bass bins cover? 18" PD drivers or 15"?

15, they look like to me. I don’t have any specific information about frequency response, but they were sold to me as subs, and all the bass-heavy music I’ve played through them has sounded great. Sorry I can’t be more specific. I just took a punt on them, and got lucky. They were built for some reggae sound system in London, originally.

Hey Ritchie, I’ve realised I might not have answered you accurately. I’m not sure if I totally understand horn-loading and how it should be described. The cabs and the way the drivers are mounted, is quite unusual. The driver faces forwards, towards the front opening of the cabinet, but then there’s kind of four channels that direct the sound from the rear of the driver, round to the front. I took a photo to illustrate:

The cabs are quite long, front to back. 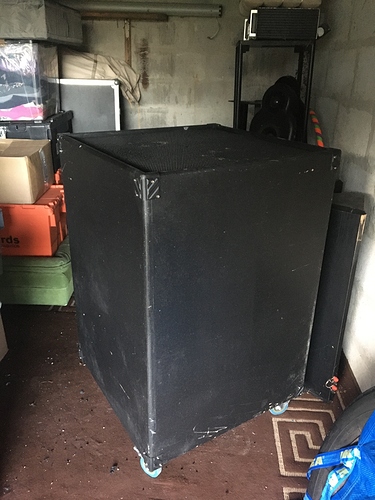 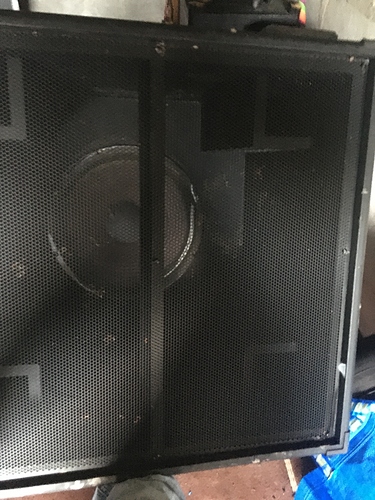 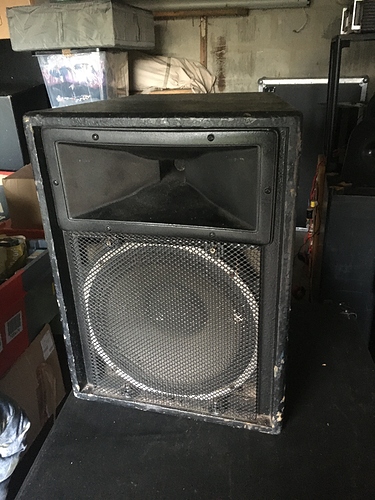 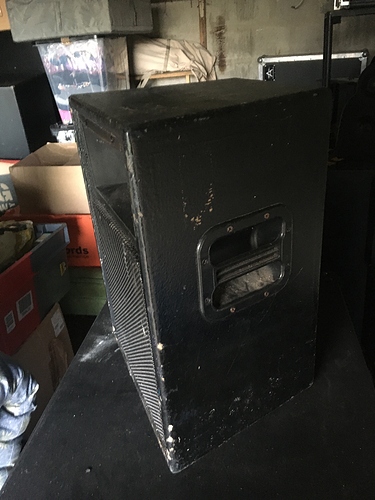