FoL V2.0 turns 16 in the middle of January. She is a very dedicated student and is a bit worried about the possibilities of her GCSEs being cancelled. She has worked her arse off for these exams so we want to spoil her. She has a notebook but we want that to be separate for schoolwork. So recommendations for a decent specification machine please. We’ve got a brand new 55" Samsung TV in the room where the gaming will take place so hopefully a monitor won’t be necessary.

I know nothing about putting PCs together but figure folk on here might be able to advise what I should look for. Budget to be somewhere in the £300-£500 range ideally for PC only. We have mouse and keyboard already and hope to use the TV as a screen.

AMD Ryzen are currently king of the hill for CPUs and cheaper than Intel.
With that budget, I would look at a s/h GPU, maybe something like a 1060/1070. GPUs are mad money these days.

My sons machine is a ryzen 5, 1060 card and 8 gb. At HD res it’s ok for middling games at reasonable detail. That was £600 with a donated sdd/Windows

Check what games she wants to play and check the specs required. You may have to up the budget a touch…

Thanks for the helpful comments

Right then, a quick scan of what is out there suggests that £1000ish is more reasonable.

It is a big room. Do you reckon a monitor is worth buying? I’ve not gamed much (Doom on a sun station in the 1990s is about my level).

What would people suggest? A link to an actual machine for sale would be a blessing here as I have no feckin’ idea what I should be after…

Right then, a quick scan of what is out there suggests that £1000ish is more reasonable.

Yep, PC gaming is not cheap these days.

We were looking at building our own gaming PC for Sam, it came out around £750, but that was before lock down…

My next upgrade is the CPU. I want a Ryzen, but that also means new mobo and RAM too. I probably keep the 970 gpu for now. And I want an M2 disk.

Would have to spend a decent amount on a Ryzen/mboard/cpu to get much of an improvement (£3-400).

So I think our best bet is probably going to be RTX3060s depending on availability etc. 3 of them

What would people suggest? A link to an actual machine for sale would be a blessing here as I have no feckin’ idea what I should be after…

The new Nvidia range of graphics cards is a game changer - they can do ray traced games, which will look amazing. If I wanted to spoil someone with a gaming PC that’s what I’d get for them.

Scan are usually good. They will build a custom machine. Here: https://www.scan.co.uk/shop/computer-hardware/desktops-gaming/geforce-rtx-3070-high-end-4k-gaming-pc

The basic machines in that section have enough with regards to processor and ram, a big M2 SSD and a great graphics card. I think that’s the way I would go.

I’ve just ordered a couple of these for my boys. We bought them new monitors to run from their laptops for crimbo, but have had numerous problems with the laptops having a hissyfit about running a separate monitor, with framerate and compatability problems.

The 3600 is a very capable processor, and the rest of the spec, although not cutting edge, should serve them well for a couple or 3 years hopefully with the games they play.

I am just about to upgrade my own machine, which is 4 years old now, as I want to play Red Dead, Cyberpunk, and most important to me, the new flight sim at high resolutions. I will wait until later in the year, when the new processors & GPUs are more affordable, hopefully, and easier to obtain without being taken to the cleaners financially… 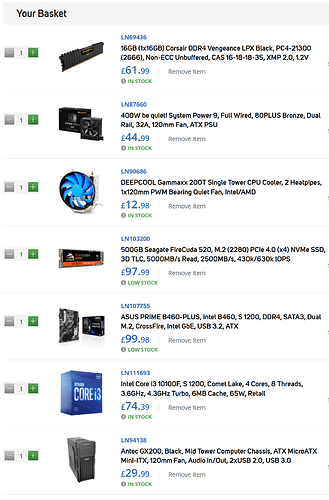 While it’s not a gaming PC it’s easily good enough for games, and I recently bought a graphics card that’ll slot in nicely.

I’d be surprised if it worked out any cheaper than ready built these days.

It’s not, but there are almost no mobos that have PCI slots.

My son had this built 12 months ago. Less than £1K and been bomb proof.

prices and availability have changed alot in that time

My apologies, he tells me it was actually 9 months ago.

Thanks for the heads-up. I think I’ll buy something new for her as it is her 16th and she is likely to be studying her arse off for the remainder of the year.

Are you going to spend a grand plus on a proper job? I did look through and found that spending several times that was remarkably easy!

I think that you can come under a grand if you want. To be fair, your TV might end up being a limiting factor, as there’s no point having a PC that can run games at 180 fps if your screen is limited to 60Hz.

I’ve decided to buy a monitor. I’m at £1100ish at the moment. The issue may be delivery. Anybody care to critique the spec on this:

I realise it is Amacuntz. I need guaranteed delivery before Saturday 16th January which this should satisfy (big day is Monday January 18th). If I can do better for the same money, my daughter would be pleased to hear it.

EDIT: Sorry Adam, I meant to reply to the thread.