Got a bit of money burning a hole in my pocket.

Looking for a DAC. Nearly all DACs seem to be some kind of headphone amplifier into the bargain.

If it has some kind of streaming capability then so much the better.

I like* the Chord Hugo2 concept of “transportable”, as opposed to portable or sitting in a rack. I’m doing a lot more headphone listening now and tend to move around the house in order to accommodate the wife, given that we’re both stuck at home all the time.

Any other ideas please?

The only two mandatory features would be USB input and a headphone socket. RCA input is quite a priority too.

Budget £2k-£4k depending on how clever it is.

Only the Hugo TT2 or used Dave. But they are not portable, in the carry around sense.

Demo the Hugo and I expect you won’t need to look further for headphone use. For the budget id consider a demo of the bigger ones unless you are sure you need portable. The Mojo would do as a better carry about addition as well as the plan A.

Probably a stupid idea, but can’t you get decent wireless headphones that connect to the main system

So out of touch with this stuff

I know a couple of people with the Chord Mojo, and they both love it.

I use the Hugo TT as my main system dac and it’s superb for cans.
I bought it for my Grados when I used them much more due to crap speakers and little chance to have loud music on.
Things have changed now and I rarely use headphones.

I guess the Hugo TT 2 is an option as well, but probably more suited to a living room system rather than being carried around the house and plugged into a laptop.

Need a Bluetooth enabled source for that stu

I liked the Abrahamsen, but don’t think it meets the critiria

From my experience if you want a certain component and can afford it the go for it. If you buy something else you always have that thing at the back of your mind even if you like what you end up buying.

Personally I wouldn’t spend that sort of money on a DAC and back in the day I wasn’t keen on Chord’s tuning but returning back to the hifi fold after a gap of a few years and these headphone DAC/amps they produce seem very popular and well thought of and, ironically, I would probably like their tuning more now.

I’ve got three distinct setups, due to buying cheap kit I can do that and have lots of combinations and that serves me far better. And anyone who tells you dacs all sound they same, well they certainly don’t.

I say go for it and see how you get on with it, most places will let you send it back if it isn’t for you, even more so in the current climate.

I think this depends on your headphones. The DAC to buy surely is the Okto DAC8 stereo, which measures better than anything else and has a headphone output that is fine if your headphones aren’t a brute to drive.

If your headphones are monsters then you might be best to separate out DAC and headphone amp.

If you really want the portability then the half sized DACs from the likes of Topping and SMSL seem amazing value around the £500 mark. They really are the state of the art, and there are plenty of charities that could do with a grand or two.

As an owner of some Topping gear I can echo what you say, all the kit have is superb value for money and I hate to think what their higher end stuff is like. Build quality is excellent as well. I’ve got the Dx3 Pro and the L30 amp and both have the option of adding +9 db gain but the L30 can drive the HD600 fine, and they aren’t an easy load, and even easier with the gain added. The L30 lets you drop it by -9 db as well for high sensitivity IEMs.

I’ve just ordered a D50s to match with the L30 as I have another pair of headphones arriving for Xmas day, so I can have a few combos and the D50s will work with my P50 as well.

I really can’t justify spending “hifi” prices when kit at this price is just so good.

Also looking at one of these

Our iDSD Signature Dish Supercharged desktop and transportable USB DAC and headphone amp that will take your tunes to the moon and back.

Not as pretty or as transportable, but a lot less money.

back in the day I wasn’t keen on Chord’s tuning but returning back to the hifi fold after a gap of a few years and these headphone DAC/amps they produce seem very popular and well thought of and, ironically, I would probably like their tuning more now.

I was of that opinion of Chord informed from listening to their stuff quite a few years ago.
However I have heard a few of their modern offerings and they are excellent.
I even heard a system with the M Scaler in it and was horrified to find I really liked listening to it, Although it is not something I would freely admit to without a certain degree of anonymity guaranteed.

system with the M Scaler in it

Any idea what the full system was?

Hugo TT2, Scaler and the accompanying power amp whose name escapes me?

The power amp was a hoooge Audio Note valve jobbie (Tomei? Kensai?)
@JezR would know better, it was his system 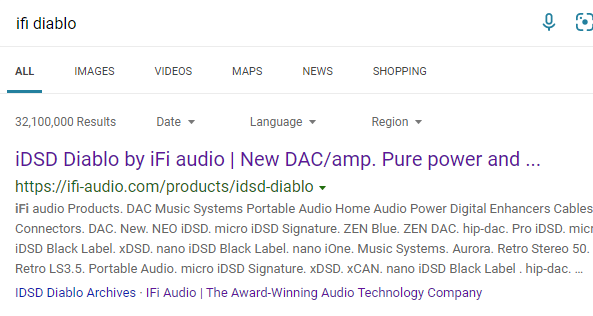 The devil in the detail The iDSD Diablo is for enthusiasts who crave pure, unadulterated sonic performance. Pure pleasure at home or in the office.

I had the original idsd, was ok, on par with the original Hugo but nothing special. As a DAC it had a very ‘digital’ sound which I was glad to replace with a NOS type, but that may be just my taste.

I have the Topping DX3 PRO which is a headphone amp/dac and it comes in at £100 cheaper but doesn’t have the battery, which is fine for me.

A lot of these cheaper dac/amps all have such similar specs and boast the same sort of thing that it’s almost just go and buy what you like the look of. The quality of the sound coming from these is so good compared to what they would have cost 10 odd years ago.

Just got a Topping D50s as well and really enjoying that one as well. Got the P50 PSU and can drive both units from it so now have 4 headphones and 4 different amp/dac combos.