Is there a market for CD players anymore?

I have a very nice one, but it just never gets used, wondering if people still use them, crave after a nicer one or if they’ve gone the way of the minidisc etc?

I’ll happily take CDs. Play them. Have triple figures of them shelved in my gym and will always grab some at chazzer shops.

Even buy some at full price alongside the vinyl as a fallback option / to rip.

I was thinking of selling my Leema Triple DAC, but didn’t see any other CD players for sale on here or on the Wam, so wondered if there was still a 2nd hand CDP market?

Take a few pics and bung it up on the Wam, more likely to find a buyer on there

I still buy charity shop CDs, and/or stuff that’s not on streaming services, but that’s just to rip & bin.

The going rate for a CD seems to be 50p in the chazzer, and you buy what they have, or ~£2 to pick what you want on eBay.

As for the players themselves, I would guess that there is still a market, but it’s tiny, populated by anachronism enthusiasts and the odd die-hard refusenik, and shrinking fast.

Yeah, will see how it goes. Not much on PFM either.

Still pick up cheap cds,but only to rip

I’m quite tempted to go back to it - not least because of the way things seem to constantly be disappearing from Qobuz these days.

I (well, Narelle akchurly) still use a CDP. It’s complimentary to the vinyls and streaming.

Which reminds me the output valve needs replacing.

I (well, Narelle akchurly) still use a CDP. It’s complimentary to the vinyls and streaming.

Which reminds me the output valve needs replacing.

I’ll replace your output valve in a minute you naughty vinyls troll.

I still play and enjoy CD’s periodically. I think the problem will soon become getting spares for rarer CDP’s.

Although I rarely use it, my CEC isn’t going anywhere.
I doubt it would fetch that much anyway.
I do have some music on CD that simply isn’t available to stream.

I still use my dCS CD player, and dCS will still fix it if it goes wrong. Best digital sound in my system is the dCS as transport through the Victor DAC with the K2 processor enabled.

I haven’t owned a CD player for about 5 years now,
Still buying CDs to rip when vinyl is not available although it would make more sense to buy FLAC downloads.
If there was a Roon type product that wasn’t Roon I doubt I would buy downloads, although I still feel the artist should get something more than streaming fees for their work.

wondering if people still use them, crave after a nicer one

What is this wizardry* Tiny silver records with no visible grooves? *yes, of course I’ve got a shitty CD player (and a DAC!) Naturally, they’re not connected to anything…

Technically I have two, a pimped Jolida Glass and there’s also one in my DSPeaker Antimode 2.0 (also not connected to anything) 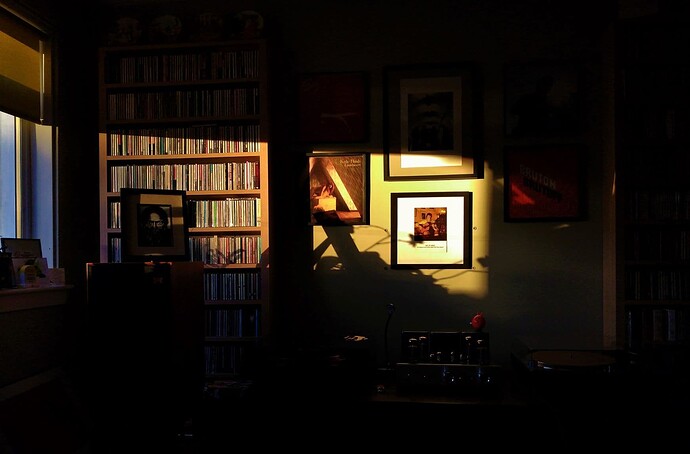 I still have a shit load of CD’s (there is an identical rack on the other side) and play them all the time.

I also bought a rather expensive (for me) CD player on the WAM which is now a nice ornament as I can’t get a new laser for it.

Bought an old cheapo JVC which has been excellent but I do have a hankering for a bit of shiny at some point in the future.