Kondo no longer at Definitive

Interesting to see Definitive formally cutting their ties with Kondo on their website citing the different direction the newer products have taken. I wonder who will take it on and what Definitive will sell instead.

Don’t quote me on this but I think some upcoming product might wear a Living Voice badge rather than come in from another firm.

As to where Kondo goes? I’d wager Padood based on nothing more than sheer guessing.

MCRU sent me some advertising blurb saying they are Kondo dealers. 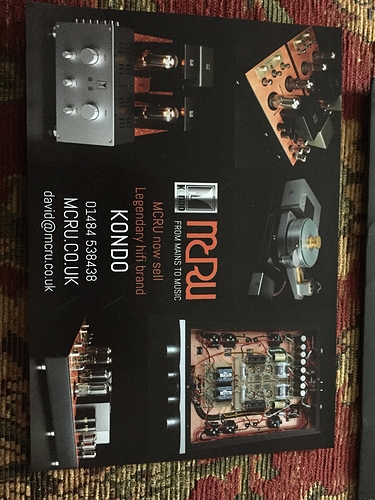 Before anyone kicks off, I was buying Nagaoka inner sleeves and MCRU were the cheapest option on Amacuntz that day. At the moment they only seem to stock stupidly priced Kondo mains cables though.

The end of an era!
I remember the excitement of going to Definitive for the first time and being blown away by the experience. it was the only place I had ever heard this legendary kit, it was truly aspirational.

I don’t. My Kondo budget has been obliterated by renovations for the past three years. Sadly, a new kitchen and some landscaping will see off any chance in 2019 or 2020.

Wow! Didn’t see that coming.
I am sure it won’t change the quality of his systems, or his enthusiasm for the business.

I think some upcoming product might wear a Living Voice badge

The 1 box CDP he was showing in Munich was no doubt the first such item. They were selling a modified Canary player previously but have been able to get it badged & built to their own spec now.

Before anyone kicks off…

Actually it is poorly phrased. I have had poor experience with the aforementioned dealer in the past. I didn’t take any notice of who was the Amazon reseller I was using so I was surprised to get the stuff from him. It is handy that he is now a Kondo dealer as I tend to avoid giving him business so it should save me a fortune.

Makes quite a statement about where Kondo are heading that Kevin should relinquish the brand.
I’m not particularly fond of some of the aesthetics of their more recent amplifiers, but is this decision based upon their looks, pricing or performance?

Mik mentioned another company had picked up kondo the other week. It wasn’t Mcru

i often use dave at mcru , i may not agree with some of the furutech claims but he always gives superb service and always grateful for the bits he sends . recently some BR banana plugs were the only ones i could get to fit an amp . he often pops in a freebie too

He was moaning to me 12 months ago that he didn’t like the current range. They sort of had some agreement where he twisted their arm to build a few of the M77 Gaku-ohs etc., but it must have become increasingly untenable.

I was talking to a chap I deal with in Germany who was the Kondo distributor there for many years although now just a retailer. He agreed that some of the newer products had missed the mark initially (particularly Pre-amps) but had evolved since their launches to become competitive with & better in some cases than what preceded them.

But then he didn’t actually agree with Kevin on the merits of the M7 or M1000 Mk2 either! Preferred those to the M77 which he thought was the odd one out.

Moving on to Nob-san clearly.

Actually you are correct about somewhere sunny but incorrect about it being a condo. Think villa, and not the Brum shower or the former Spurs beardie.