These are not in order, but without doubt they are my favourite gigs. Consummate performances and incredible atmosphere among the audiences.

Marilyn Manson - Alexandra Palace 2003 - another one with one of the kids - fantastic venue, what a show / spectacle, amazing mosh pit.

Something to do with the potent hash fudge…

My old mate ran a boozer in Shotts near Glasgow. He was a real character / chancer and had got to know Spider from The Pogues really well.

After the Saturday gig he persuaded them all to head back to his boozer with us in tow as well and the band played Waltzing Matilda very very drunkenly.

A once in a lifetime experience - well what I can remember of it.

Sitting about 4ft from Gil Scott-Heron in a tiny club in Glasgow and him offering a toke on his joint was very very special.

Ditto watching an 18yo Neneh Cherry in the Sub Club Glasgow

Memorable for the wrong reasons, I was woken up by a bouncer who thought I was dead, collapsed in the back of a dingy basement known as the Underground in Croydon, the bouncer told me he didn’t think anyone could crash when Zodiac Mindwarp and the Love Reaction were playing.

Found this poster online, so they had a few decent bands there! 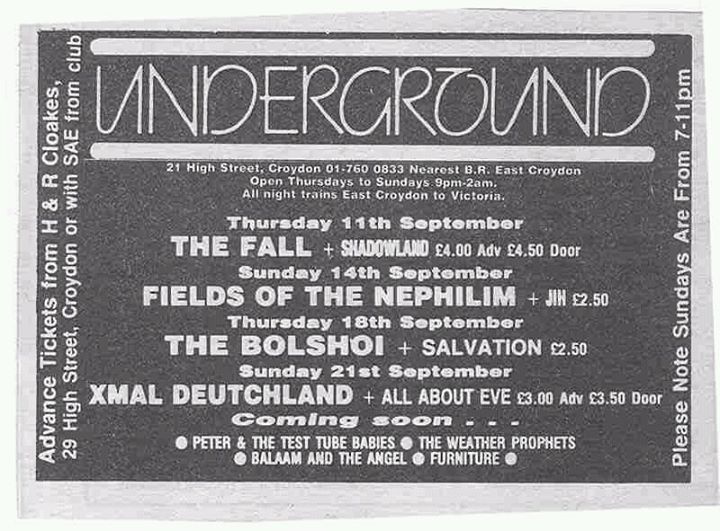 Thin Lizzy (supporting Bachman Turner Overdrive) After the gig we shared a joint with the band. 1975

Haha! 16. First gig I ever went to. On the train with a couple of mates…

Edit: actually I would’ve been 15.

Ozric Tentacles, Exeter 1989… where “it” all started for me, arguably…

Yep, that would have done it