Have extremely little experience in them. Are the passive ones generally OK, or should they be avoided?

You need a sensitive power amp and short cables, but I liked my pot-in-a-box

Khozmo are fairly cheap to get an idea of the sound and you won’t lose anything when you sell it, I liked the one I had to start but after a while found that I wasn’t listening to music very much. Difficult to describe but it just didn’t have any grip or engagement to me.

Cd output is usual 2v so you should be fine

I’ve quite liked some TVCs I’ve heard over the years; the Silvercore one that Deco used to do was very good indeed, but I agree with this overview of passives.

Quite a lot of ‘integrated’ valve power amps consist of a power amp with a pot and an input selector switch wired in as the first things in the audio chain. As long as the pot’s in the amp box they sound fine. But if you take the pot out of the amp and put it into its own box then people seem to take against them. If anyone’s got an explanation for that I’d be interested to hear it (the thing about long cables can make a real difference, I agree).

Aren’t most preamps and integrated amps active?
I am sure there are some that aren’t, but aren’t the majority active, even the cheap ones?

Nor me, insipid, lifeless, bland, boring, a vampire that sucks the life out of the systems I have heard them in.

Possibly the difference between the pot forming the earth reference in something like Stu’s AI300 and having another pot parallel to a fixed resistor inside a power amp?

Since AI’s been mentioned here are a couple of sections of the AI500 (it’s not unusual in its circuit architecture). It’s an integrated amp and I think we’d agree it’s ‘active’. It consists of a Power Amp

where the signal enters from the left at 2, passes through the amp, and leaves from the right at 3, heading out to the speaker. It’s arrived at 2 from this preceding stage

The Power Amp is definitely active - it’s got valves in it. The Switching stage has no active devices (valves or transistors). It is exactly the same circuit as a passive pre-amp might be. But it’s in the same box as the Power Amp. So we call the whole lot active and then Kev will not have to lose any sleep over the fact that there’s an insipid, lifeless, bland, boring vampire inside the box. Because he won’t know

Just to repeat, it’s not only AI. I’ve seen inside lots of amps and for some good reasons (e.g. avoiding input overload) this is very often how it’s done.

To be honest, if there’s a volume pot you can always draw a dotted line around it on the circuit diagram and say “that bit’s passive”. Any ‘active’ audio circuit will have passive bits in it.

Possibly the difference between the pot forming the earth reference in something like Stu’s AI300 and having another pot parallel to a fixed resistor inside a power amp?

The ‘bottom’ end of the pot will be connected, via the interconnect cable, to the ‘bottom’ (earthy) end of the fixed resistor in the power amp, which is there mostly to tie the amp’s input to signal ground in the event of someone switching it on with nothing plugged into the input socket. Which one you designate as the earth ‘reference’ is a bit subtle and, in a decent design, shouldn’t be very important. It is true though that the pot, or pot-plus-resistor, will load whatever comes before it, and the loading will be heavier with a resistor doing a mostly unnecessary job than without it. But it needn’t be much heavier at all, at least in valve amps.

In some cases the same arises with active pre-amps. To give AI a rest here’s the circuit of the Leak Varislope 2 with coloured lines drawn on it by me. They divide it into functional blocks 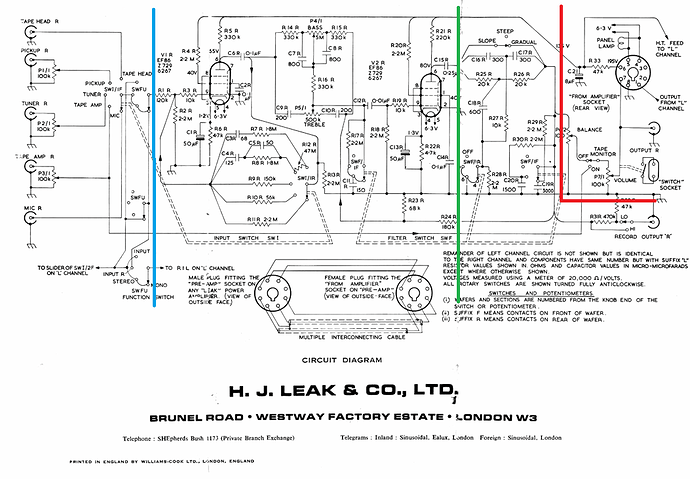 Again the signal comes in on the left. To the left of the blue line are sockets and selector switches like those on the left of the second AI circuit in the post above. The signal then passes through some active stuff between the blue and green lines. To the right of the green line is some passive filtering. To the right of the red line is a Balance control followed by a Volume control followed by the output sockets (Leak give you a choice of two - the RCA phono one labelled OUTPUT R and the octal one above it).

So this is just like the right hand bit of the second AI circuit (see, there’s nothing new under the sun). The point is that the volume control in this active pre will be in parallel with the input resistor in whatever power amp follows it e.g. the 1M one in the Stereo 20. So if we think there’s a problem with pot-plus-resistor in passive pre’s then we have to accept that it’s there in some active ones too.

I was thinking of volume setting. If most of the " loudness" has occured by the 10 o’clock position, which most do, then surely that means there is an active preamp stage.
The passives I have used, you have to use nearly maximum setting, to get maximum loudness.

Where you need to set the volume control depends on how much gain there is in the system as a whole. Usually active pre-amps have some gain which, given that there is also gain in the power amp, means you have loads of gain in total so you may have to keep the volume control, wherever it is in the circuit, turned down low. Usually passive pre-amps have no gain at all, in fact there can be a dB or two of loss. But you’ve still got all the gain of the power amp. If you need to use all that gain (i.e. have the volume knob turned right up) just to reach a comfortable listening level then, well, you may be struggling a bit for gain and adding some in a pre could be a good idea.

Both the ‘usuallys’ have exceptions though. As Ed says, TVCs are passive, but they can still have gain (voltage gain, not power gain, but it’s usually voltage gain that we need). Equally I have seen pre-amps with just one valve in them, configured as a cathode follower, and that gives them the ability to drive more difficult loads including longer cables, but it gives no (voltage) gain despite them being active, because there’s a valve there. With these you’d need the volume control set as high as you would with an ‘ordinary’ passive pre.

Are the passive ones generally OK, or should they be avoided?

I’ve been using a passive pre-amp for the last couple of years, and I’m totally happy with it. I love the sound of my power amp (Sugden A21ap) and I didn’t want to add anything to it, but had several sources I wanted to use, and not all had built-in volume controls. Previously I was using a Sugden A21a integrated. The sound is better with the power amp with a separate passive pre, than it was with the integrated, and they have identical power sections. Not all passive pres are the same, though. The one I’m using (little NVA thing) seems to be utterly transparent. But I tried another, that a lot of people rated, and it introduced a load of noise into the signal path, and seemed to be attenuating significantly, even at theoretical full volume. Needless to say it didn’t stick around.

Thanks for all your input <
Think I’ll take the ai to the menders to try and eliminate the hum, and not waste time going pre/power.
Might even treat it to slightly posher valves.

Most of the really good systems I’ve heard have active pre-amps. If you have enough gain in the system overall then a buffer system (like the cathode follower that Graeme mentioned, or as championed by Nelson Pass) might do the same thing. But then I’ve heard great systems with passive pre-amps.

I’m toying with the idea of getting some sort of pre-amp thing going on my system, but I will need five of them, so they won’t be Kondo. I’m looking forward to procrastinating for some years in this area.

I’m toying with the idea of getting some sort of pre-amp thing going on my system, but I will need five of them,

The Dac-t preamp boards are very good. Their stepped attenuators are good as well. 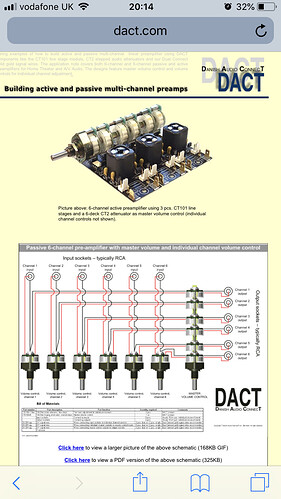 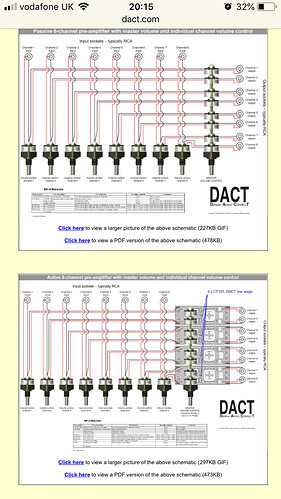 I had a dact attenuator in my pre. It was a lot better (more detail, space) than the alps blue it replaced.