Roll-Up: A Search For The Finest Sausage Roll

We have done Mince Pies TO DEATH

and I love a good sausage roll. I’m sure they are as close to our hearts. Closer probably, considering the animal fats involved.

The only reason I go to Lopwell is for the sausage roll on the M5 Gloucester services. Peerless.

I have considered a detour.

If you can afford two then I call money laundering shenanigans.

Trying to remember where we used to get the Sausage Rolls Of God.

They were massive and highly spiced and fatty, and you couldn’t really eat one on your own

It’ll come to me.

There’s a fairly upmarket chain of corner shops/small supermarkets called Budgens and their bakery foo is rather good. They do a range which is on par taste-wise with the farm shop on the M5, but they are smaller

Can recommend our local Downings ‘Clogger’ There is a Budgen locally but can’t think where it is! Maybe Rye…

I shall bring some to next Lopwell

ngl, I zoomed in and looked for longer than I should.

They are disarmingly stout (in the flesh)

I’ll have to stick with my own. The key (for me) is finding the right sassermeat for the filling. The Fetlar one is excellent but I can only get more of that when my neighbours next slaughter a pig.

Fortunately we have two small butchers who produce lovely stuff, Andersons and Sound Butchers. Both are pretty much on a par with the local meat and I can happily live with either. 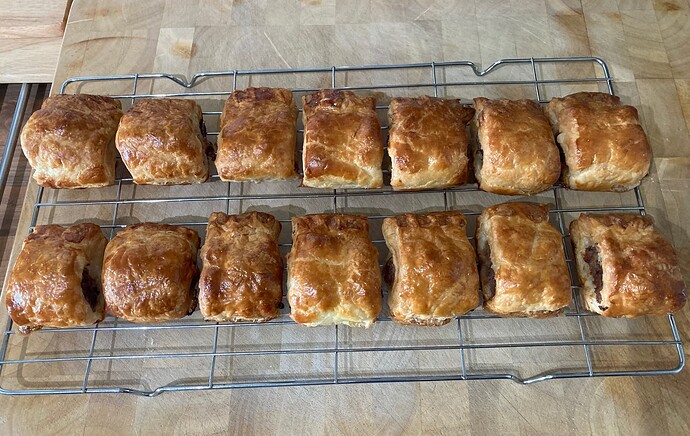 @coco has sampled and seemed to enjoy them, judging by the rate at which they disappeared.

Do you want me to pick up some frozen ones that you can bake there?

I thought they might send them frozen but I guess they don’t have the packaging but yes, that would be great.

Budgens are part of Booker, who are part of Tesco. They’ve got their own distribution centre in Didcot, surprisingly not part of the Tesco one which is also in Didcot.

I had an NHS sausage roll for lunch today. Thank fuck I’m being discharged as it was a criminal offence to inflict something like that on the sickly.