Shooting the shit - all about the gunzs

From the guardian. FFS. What is the rational argument to move away from EU to US if this is potential outcome. (Overkill I know but calming so only ffs)

Wall Street is preparing for a likely Biden victory, however. Shares of the gun makers Smith & Wesson and Sturm Ruger have both rallied around 8% since late September. Experts predict a surge of gun sales if Democrats win control of the Senate from Republicans, giving them majorities in both houses of Congress and making it easier to approve gun control legislation.

You don’t have to be an expert to predict that.
It happens every time

It happens every time…

That’s the bit that I so struggle with.

That’s the bit that I so struggle with.

They assume some kind of ban is coming. Almost everyone I knew shot recreationally, at ranges or hunting. Even one of my friends, who is no right wing gun nut, bought an AR15 last time Obama won just in case they got banned again.

It’s weird, really, how different Americans are. There is almost nobody in the UK who would consider that an assault rifle is a sensible answer to any question. That a vaguely reasonable American might do so is entirely perplexing.

It’s a hobby. For millions. It’s not an especially American thing as such, many countries continue to shoot recreationally. I just think it’s never been a huge deal here.

What makes them even think they need any form of gun in the first place? I’m ex Army and even though I live in an area where due to the game shooting I would qualify for a license virtually automatically it’s never crossed my mind to ask one.

What makes them even think they need any form of gun in the first place?

Who said anything about need? It’s a hobby. There are many try to justify it on the base of need but that’s all twaddle.

It’s a hobby. For millions.

Yeah. But it’s like if everyone kept a machete just inside their front door. And practised hacking big lumps out of, say, sides of pork once a week. And said “It’s a hobby”.

There’s only one actual reason for doing this stuff in the urban first world. And that is so you can kill another person if you should ever feel it might be a good idea.

I didn’t “need” a compound bow. It was still a lot of fun.

And practised hacking big lumps out of, say, sides of pork once a week. And said “It’s a hobby”.

Forged in fire is great.

Sorry no, it’s a mindset only one step from this to killing humans. 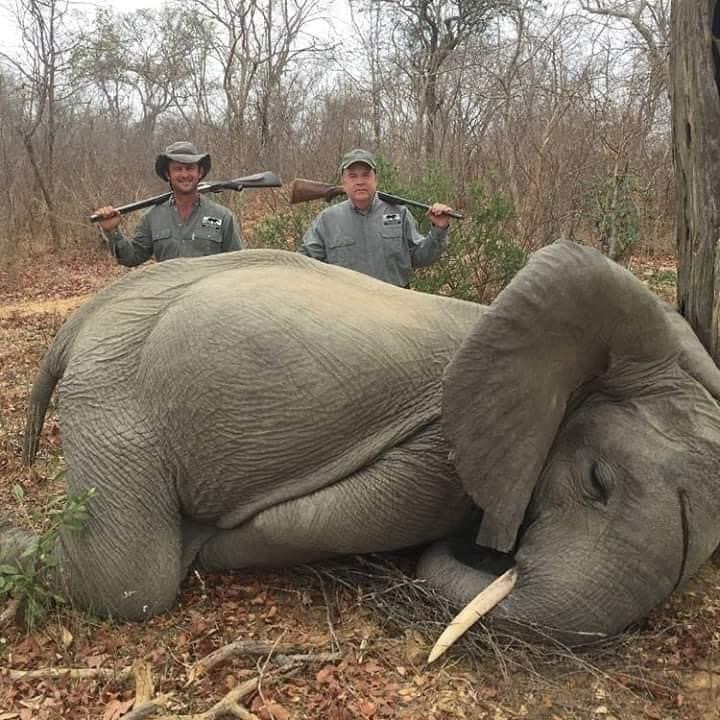 They killed a baby elephant! The hunting company is Charlton McCallum Hunting Safaris. The owner is Buzz Charlton. The professional hunter is Max Delezenne and the trophy hunter is Mike Jines, the owner of TopGen

Understand I’m not pro gun. Or hunting. I’m completely happy and supportive of the laws we have in place here.

But it’s part of the recreation in the USA, and not a small part. It’s not an easy thing to say oh you can’t have the things you have always had.

I do enjoy target sports though, archery, shooting rifles down a range etc.

I also have spent many years doing martial arts including karate, judo and bjj. You could argue that only exists to harm and kill people too.

At least these people have achieved something. What they have achieved is hideous, and damns them as some combination of sick and unbelievably arrogant. But at least there was an aim to the exercise.

The aim of becoming proficient with an assault rifle is not to shoot it at a distant graded target and have the highest point score in your neighbourhood. I’m guessing most gun owners aren’t in local good-natured target-shooting leagues. They want to be as good as possible at blowing other people away.

I suspect the wankers who do that can be counted in the few hundred, here and in the States. A small number compared to the tens of millions who own a gun.

Actually a good chunk of my friends were.

It’s not an easy thing to say oh you can’t have the things you have always had.

They managed it with bear-baiting here. And slavery in most places.

In the UK we have a different definition.

Not the elephant thing, the owning a gun for a recreation is one step from murdering people thing.

They managed it with bear-baiting here. And slavery in most places.

And those were as common as firearm ownership in the states now?