Why don’t tonearms incorporate a mechanism to reduce anti skate force gradually as the cartridge moves towards the centre of the record?

Why isn’t it recommended to increase the anti skate force when playing 45 rpm records?

educe anti skate force gradually as the cartridge moves towards the centre of the record?

Wouldn’t it need to increase as the cartridge moves towards the centre?

Doesn’t a spring increase it’s force the tighter it gets ? Plenty of antiskate applied that way?

As I understand it, the requirement for bias increases with the speed at which the groove walls pass the tip. Toward the centre of the record this speed is lower.

So would you not need to decrease bias for 45s?

Why decrease? The groove is passing the tip more quickly.

Incidentally, if I’m not mistaken, the FR64 mechanism does reduce bias towards the centre of the record. 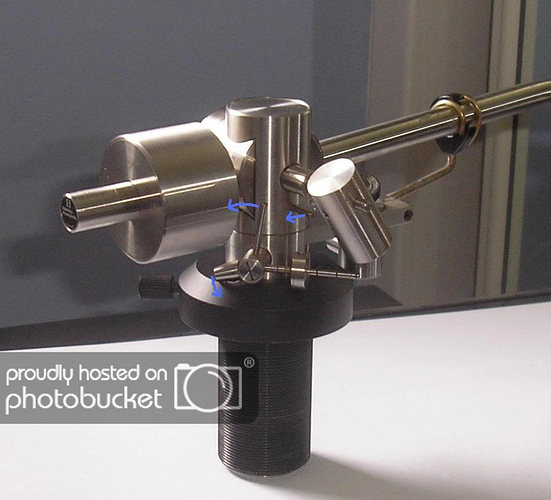 You beat me to it, was about to mention that one. A clever solution to the need to reduce it, you can also apply more for faster records.

I think decrease because on inner grooves the radius is less and therefore centrifugal force,that the bias is counteracting, is less.

Bias is interesting. It arises only on arms with an offset; basically the friction of the record dragging on the needle can be resolved into two forces. One goes through the arm pivot, and one goes towards the centre of the record. The former is countered by the bearings, but the latter has no natural counter, so you need bias force.

The thing is, the friction is not constant. It’s greater at the outside of the record, as the velocity is greater, and it will also vary with the signal (ie it will vary with frequency and recording level on each record), as well as things like stylus profile and tracking weight. Bias systems are all flawed kludges.

I always find it surprising that vinyl works at all, let alone can sound as good as it does.

Because when you mentioned 45 I immediately thought of 7" which is closer to the centre but now realise 12" singles and LPs at 45 rpm was what you were referring to. Late night early morning brainfart sort of thing:joy:

I think decrease because on inner grooves the radius is less and therefore centrifugal force,that the bias is counteracting, is less.

Skating, which bias is compensating for, is a centripetal force and works in the opposite direction to a centrifugal force.

Funnily enough the contrast in sound between 7.5 ips & 3 3/4 ips tapes is analagous to the difference between playing records cut at 45 rpm and normal LPs cut at 33.33. The slower speed is a significant compromise in performance for the simple facility of having longer playing time.

I still don’t understand why the force should decrease towards the centre. Surely the force must need to increase.

@Ruprecht noticed on the groovemaster web page you have an arche headshell on your 301 with what looks like a Koetsu coral.

Were you able to balance the cart ok as with the IO I cannot get it anywhere near 3g with the heaviest weight at the very back of the stub? At the moment I’ve got the weight right at the back with a pound coin blu-tac’d to the weight.

with the IO I cannot get it anywhere near 3g

it was just a number, the scale is actually reading overload so it’s more than 5g.

Is the overhang correct?

TBH haven’t a clue what overhang is but I set it up using the Feickert protractor which seems to be fairly idiot proof.

Ovehang is how far the stylus extends beyond the spindle. With a heavy cart like an Io this will make a huge difference to the arm balance.