I’m leaving this a bit vague, as I’m open to suggestion.

I have a bit of cash to spare and am going to use some of it to upgrade the arm on my Orbe. Currently using an RB300 with full Cardas rewire and fancy counterweight. I’ve been pleased with it for a few years now, but want something better.

My usual approach applies: buy something at a price that leaves a reasonable chance of only minimal loss if I decide to move it on for something else.

Budget is flexible, but I’m thinking of spending up to about a grand on the arm (possibly more - see below).

My list of possibilities currently includes the V2 Audio Note arms, Audiomods, SME IV (I’m not expecting one of those for £1000, but could be tempted to stretch the budget if one comes up at a good price). My ultimate target remains an SME V, but probably not at current prices (though if you have one for sale, let me know - I might…)

Feel free to chip in your twopence worth.

Bought it off Adpully last year as a sealed box.

emporium is selling the silver wired AN Arm two at the mo for £700 but it’s been there for a while so he may take an offer.

£300 is good - I’ve never attempted to fit a new cartridge tag. I have soldered before, but nothing that delicate.

Saw the one at Emporium, but it’s terminated with XLRs (if we’re talking about the same one).

Wasn’t going to attempt it myself either as it’s some seriously thin stranded wire.

I’ll send it off to Audio Note for repair and if you’re still interested in a few weeks let me know.

I’ve got an SME IV on my Orbe. It was a big step up from the OL Silver it replaced. Well worth saving up for. I’m based by the M6 J3 (Coventry) if you fancy coming over for a listen.

That Audio Note seems a great price, go for that, I reckon.

Just been thinking the same thing. I wouldn’t even need a new armboard.

I could spend the change on a fancy cartridge.

Cheers! - If I’m ever in your neck of the woods I’ll drop you a line.

Just thinking out loud, but if I do end up with the AN arm, I’ll have a fair chunk to spend on a cartridge…

The AN is a bargain. Buy it and a Hana SL with a headshell weight 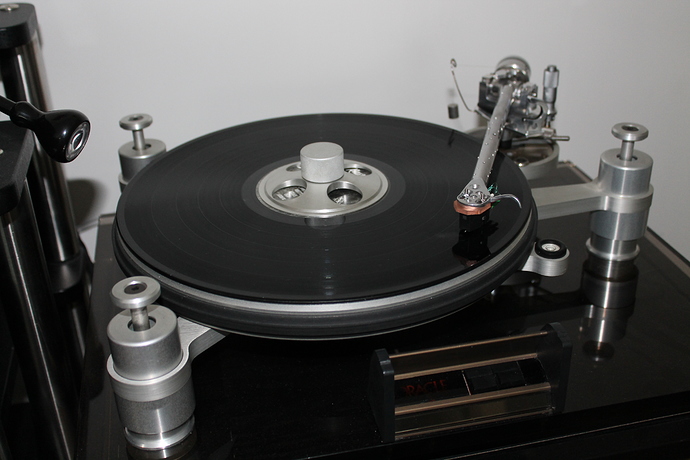 Is the headshell weight a must on the AN arms?

Bang a lump of blu-tac on it, job done

I’ve had a Hana SL on my AN Arm 3 and it’s tracked fine without any need to worry about adjusting weights.

Well, it looks as if it’s going to be the AN arm with a Hana SL.

Being a cynical bugger, I don’t get as excited as I used to when it comes to new gear, but I must admit I’m rather looking forward to this particular upgrade.

It’s 1 gram lighter than the IQ3 I was using so it should be ok.

Is the headshell weight a must on the AN arms?

The issue is where the arm-cartridge resonance occurs. It can be calculated based on the arm effective length, mass and cartridge compliance, or something. From memory you want it around 8-13Hz, so it is below the sub bass but above warp frequency. The extra mass is simply a way of lowering the frequency.

I’d get it, try it and see if you need to make a change. At least it’s easier to increase the mass than reduce it. I’m sure vinyl engine or similar has an online calculator.

Thanks - just looked up a calculator, entered the effective mass figures for the AN arm and the Hana, and added in the latter’s compliance.

According to the clever people on tinterweb, that’s about what’s needed.