What kit are you listening to today?

Posting this for my own benefit, cos I have long-since completely lost touch with what people are playing music on nowadays, so please post Yer Stuff - especially cables, carpet grippers, magic-stones, earthing arrangements, resonators, stair rods, cable-lifters and all the stuff that really matters

I would like a second arm/cart, which ain’t possible with this deck.

That deck would accommodate a Rigid Float arm no problem, and no cutting, drilling or fucking up the deck malarkey.
Very nice stereo

Listening today has been in the car (Bose), and the kitchen Naim Unitiqute2 and some Proac Super tablettes

Entirely agree - I just gave up on the first one and fucked its shit up.

That deck would accommodate a Rigid Float arm no problem

Got to love the Dreiklangs. Properly sized speakers turned round the right way with big drivers in a nice wide baffle. Fuck knows why having smaller drivers on the narrow face has become the norm.

I like the look of the Dreiklangs. Even if I had the cash to drop on them, they would not pass muster with my missus. Size wise, given the current room, I am at peak speaker.

Certainly took some commercial-cojones to choose that form-factor, not sure I’d have done so!

I imagine small groups of brow-beaten men living in community hostels listening to Snell As and massive Tannoys as part of some long term therapy.

If I won the lottery, bollocks to an upgraded listening room. I will buy a listening house, with which I will stuff all manner of expensive foo.

And a walk-in fridge, obviously.

My kit today consists of some nice bits that I’ve been lucky to find. They seem to work well together much to my surprise. Certainly no changes planned for this year. 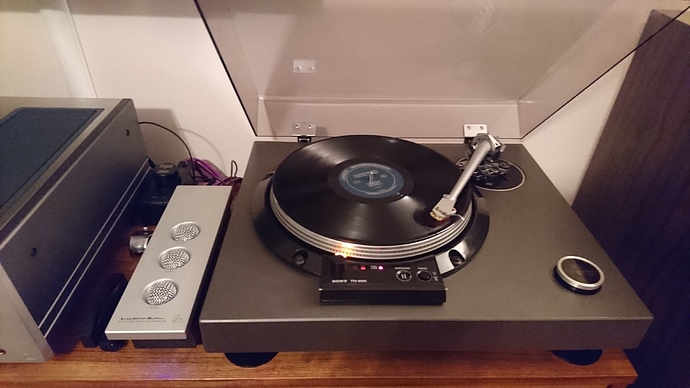 Luxman L590ax, Yamaha T 07, Lockwood Majors with MG15s & RFC crossovers. (Yamaha streamer and ps for the phono stage are in the cupbard under the tt.) 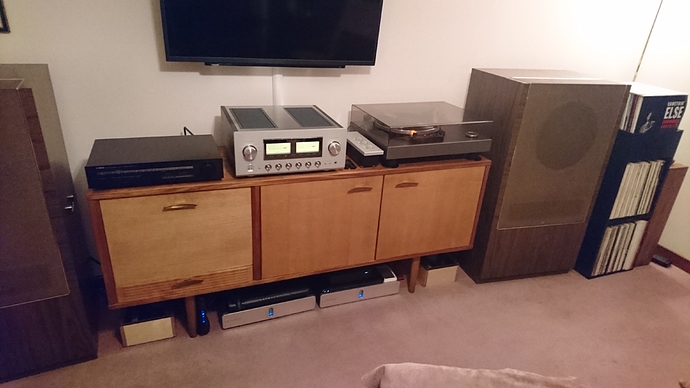 For cable I’ve gone full silver foo: Siltech speaker cables and Yannis arm cable and interconnects. My biggest disappointment is having had my crossovers built without bean cans. What was I thinking?

A friend of mine has recently been buying some Mana from a poor chap whose wife has banned him from having any kit at all. Poor sod. TBF Mana will do that to a person.

I have been listening to a new to me, cheap, four channel transistor amp for the the third day in a row. A change after 35 years of valves. To my ears today the bass is a massive step up the mid and treble is something of a step down - Overall as it stands though this budget system does a very good job indeed. Added plus is that I now have a workable high volume capability. I do have an incoming pair of Supravoxes for tying the OB speakers that I am hoping will help things improve further. When I had these before they were super smooth.

This system photo above is 100% spotify based: Preamp and crossover is a 2x4hd miniSDP into a 27 year old Yamaha MX-35 2/4 power amp, OB speakers 15 inch Selenium neos and a 4.5" PRV mid/ treble driver crossed over at 280hz : The Behringer amp on the shelf is currently unused but might be needed when I insert the Supravox and RAALs drivers.

I’m glad that Heco took the gamble. It was definitely a bold move and I hope it pays off for them.

I particularly like that deck, and NEED that Luxman PS - even if just to look at - lovely bit of slightly-leftfield industrial design

I’m glad that Heco took the gamble. It was definitely a bold move

Me too - I bought the original Direkts for me and never expected them to sell, but they do, which has been a nice bonus. I knew I had to have the Dreiklangs within 5 minutes of firing-up their un-run-in asses - but for that I had to have Sam’s approval . . .

She nearly fainted when she first saw them, then greenlit the madness when she heard the first track . . . Yet to flog any, but that’s not their point. I suspect only some pretty serious horns could supplant these.

I’ve been interested / intrigued by that Project RS transport. A review / comparison vs other transports would be useful. You can pick up used Esoteric transports quite cheap these days and those belt drive ones are similarly priced. My point being, when I do need a new transport there are a few options.

As it happens, I lent the PS and SUT to a friend last week and heard them with his Cadenza Black. Very nice combination. Lovely open midrange, rich sounding with “great tonal colour and texture” as my friend put it.

Yet to flog any

I’m genuinely surprised as in the world of expensive speakers, they strike me as rather good value. I guess it was a bold move on your part too to stock them. Fingers crossed that you can shift a few pairs.

A review / comparison vs other transports would be useful.

…but unlikely, there’s next to no market for CD-anything now. It works reliably, has extensive connectivity options and uses a (currently) easily-replaced Philips CD-PRO mech. Pro-ject have what few reviews there are here: http://www.box-designs.com/main.php?prod=cdboxrs&cat=source&lang=en
I don’t flog 'em, but that’s down to the distributor, not the product. For me it’s a keeper.

Fingers crossed that you can shift a few pairs.

No BS, I’m really not bothered - I love 'em, but I can also see they are in an awkward spot - huge, wide, oddly styled, high sensitivity and made by a manufacturer with no “Boast Appeal” - the fact they’re bloody good and fair value is irrelevant to a market that buys on looks and snobbery.